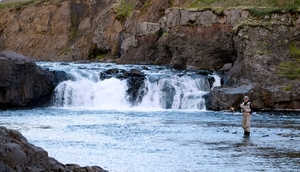 In Norðurá general salmon fishing law applies and all anglers should familiarize themselves with these. Some specific rules apply to this river additionally. Fishermen are asked to respect Icelandic nature, only to use fishing gear that is allowed, disinfected at arrival in the country and not to litter. The river keeper of Landowners association of Norðurá is allowed to check fishing gear and catch. The phone number of the river keeper is: +354 860 0333.

The riverbanks and environment should be treated with respect. No rubbish should be left on the riverbank when an angler leaves.

All catch is to be entered into logbook in the lodge.

It is allowed to kill 1 smaller salmon per watch.

If large salmon must be killed due to gill bleeding the lodge can claim it.

Also if more salmon have been killed than allowed then the catch can also be claimed by the lodge.

Please contact Head of Sales Rafn Valur Alfreðsson for any and all information about procuring licences for angling in Norðurá. Either via phone +354 824 6460 or via email at mail to: sala@nordura.is

Norðurá is in Borgarfjörður, about 110 km from Reykjavík and to the lodge on Rjúpnaás.